America started recording their radio shows to disc before Australia.  When they started selling their programs to Australia, it was all profit.  They had already made their money in their domestic market and the discs exported to Australia were sold at a price that Australian Producers could not compete with.  One article quoting an Australian Producer, indicated the price was as little as 1 pound ($2.00) per episode for a 52 episode series.  A price that Australian Producers couldn't come close to matching.  These shows were particularly prolific in the 1930's until Australia followed Great Britain to War in 1939.

In November 1939 The Australian Government announced a ban on importation of goods from the U.S.A. to save their U.S. dollars for essential goods required for War.  A list of goods banned for importation from America was promulgated.  Goods already paid for or ordered prior to the ban on importation, were allowed.  Radio Transcription Discs were on the 'Banned' list.  Australian Producers who had been calling for such a ban to protect local production, took advantage of this situation to build an Australian Industry.  The importation ban of American Radio Transcription Discs continued even after the war, until the early 1950's.

There was however a brief exception to the ban.  More on that later........

This is a list that I add to as I research. It is a list of American Shows that I have confirmed as being broadcast in Australia prior to the Importation Ban.  Many of these shows continued to be broadcast in Australia for a number of years.  I note them as I see them appear in program guides.  These shows were played in all states and Territories.  These are not the only shows and I will continue to add to the list as I confirm shows.

Listen now to American Produced Shows broadcast in Australian prior to the Ban. 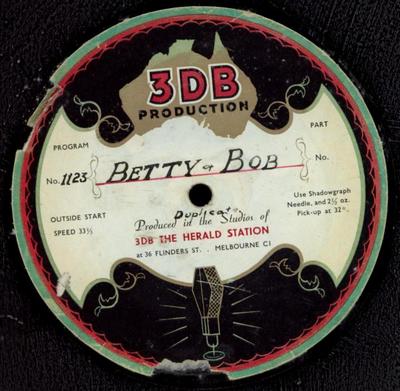 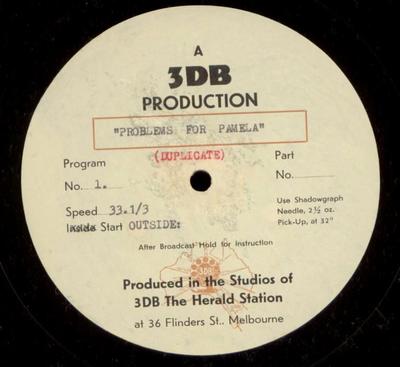 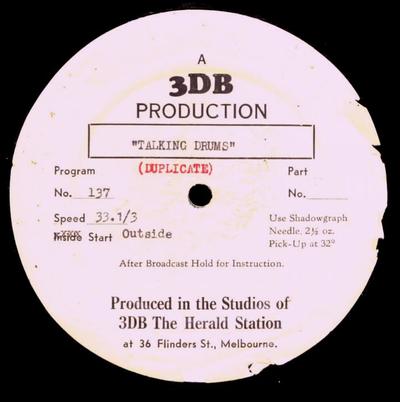 Craig Nugent supplied these labels to reinforce the Article in the section above, which advised that 3DB was broadcasting C.P. Macgregor U.S. titles in Australia.  Craig indicated that 3DB actually re dubbed them for wider distribution.  Above are examples of some of the 3DB Labels used.  Note all three examples include the word 'Duplicate'.

Shows that Craig has examples of, include:

Talking Drums
Betty and Bob
Hope Alden
Cavalcade of Drama
Stars over Hollywood
Problems for Pamela
Thanks to Jerry Haendiges from otrsite.com for supplying Black Ghost and Black Magic.  Many thanks also to Old Time Radio Researchers Group of which I am a member, for supplying many of the other U.S. episodes.
The exception to the Ban on importation of Radio Transcription Discs from America?  Wartime.

After Pearl Harbour, the U.S. entered WWII and American troops were stationed in Australia.  It was thought that entertaining the American troops with radio shows from home, would make them less homesick and less of a culture shock for them.

Bringing in American Radio Shows on Armed Forces Radio Service Transcription Discs took quite some time and a lot of haggling with the Australian Government.  To make things worse, the shows were to be broadcast in certain time slots on Australian Stations, instead of the Americans setting up their own broadcast equipment in their camps.  Reading articles in the newspapers of the day, the service was on, off, on again and off again.  Then when it actually started, it didn't last very long.

Initially the shows were divided up between the stations by a ballot.  Then the fun started.  Sponsors ads from the U.S. were left in the shows and they were advertising goods not available in Australia.  Though some enterprising people started to overcome that problem.  The fights broke out between commecial stations and the Government owned ABC.  Commercial station complained the ABC was not allowed to advertise and the ABC complained that the commercial stations were making money from selling advertising on the shows.  This was a problem because the actors and entertainers in the U.S. were donating their time and effort to assist the U.S. Government in wartime and it wasn't supposed to be for commercial purposes.

The to and fro got so bad that a representative from AFRA was sent out from the U.S. to see what was going on.  The broadcasts stopped altogether soon after.