Broadcasting demonstrations started with Walter Coxon in 1918 at the Perth Royal Show.  He broadcast speech and music from one side of the showground to the other.  Then Ernest Fisk from A.W.A. gave demonstrations to engineers in Sydney in 1919 and to politicians in Melbourne in 1920 by broadcasting the record “God Save The King”.  The distances were around 500 yards.  The Government started granting broadcasting licences in December 1922 (first was Charles MacLurcan with 2CM Sydney).  The first broadcasting licences were issued to amateur operators.  These radio pioneers were responsible for the development of broadcasting in Australia.  Most stations started with one microphone and one 78 R.P.M. horn record player, (the microphone was placed in the horn), and sometimes a pianola.  When a record finished, the announcer took out the needle, put in a new one, and then played the next record.  Some stations also experimented with television (previously called ‘radiovision‘) from 1929.  The first was 4CM in Brisbane, which was often viewed in Melbourne.  They were granted Australia’s first television licence in 1935 (see separate article).  Most of these licensed amateur broadcasters became the owners, managers, and engineers of the early commercial and pre ABC stations.

In 1923 the Government started issuing permanent broadcasting licenses to businesses, with an unusual type of receiver, following lobbying from A.W.A. and other receiver manufacturers.  It was the “sealed set”.  Receivers were sealed to receive only one station of your choice, and a licence fee was also paid to that station.  The “sealed set” stations were 2SB/2BL and 2FC Sydney, 3AR and 3LO Melbourne, 5CL Adelaide, 6WF Perth, and 7ZL Hobart.  This scheme only lasted one year, as many people worked out how to avoid the licence fee by modifying their sets to receive all stations, or learnt how to build their own receivers.  In 1924 the Government established two classes of licences: “A” class financed by listeners licence fees, and “B” class financed by advertisements.  “A” class licensees were allowed to use a small percentage of their on-air time for advertisements until 1932; however, 4QG Brisbane was the only station to take full advantage of this.  The first “B” class licence was 2BE Sydney in 1924.  However, it closed in 1929 due to financial difficulties.  The oldest surviving “B” class licence is 2UE which started two months after 2BE.  The licensees were one-off entrepreneurs at first.  There was no program networking until 1929 when the Government granted the privately owned Australian Broadcasting Company a three year contract to program all “A” class stations.  Various categories of “C” class licences were also proposed, including corporate and university stations.  The Government also considered establishing a “C” class network to be leased for special event broadcasts.  No “C” class licences were ever issued.

Unusual mobile radio stations were established in trains broadcasting throughout New South Wales (2XT 1925-1927), and Victoria (3YB 1931-1935).  These trains operated on a one week schedule with five days broadcasting in each country town, and two days travelling and setting up,  A salesman travelled ahead to arrange local advertisements to cover costs.  They were licensed to broadcast at any location at least 2 miles from any Post Office, and 30 miles from other radio stations.  The 1920s also saw A.M. stereo experiments in Perth, with 6WF using a medium wave and a long wave transmitter.  Listeners needed two receivers to hear stereo.  Also in the 1920s, mono F.M. experiments were conducted in Sydney by A.W.A. station 2ME on short wave (9 MHz.).  From 1927, A.W.A. experimented with regular short wave broadcasts to the United Kingdom.  These broadcasts became “Australia Calling” and later “Radio Australia”.  Each broadcast started with a kookaburra laugh.  Radio Australia became part of the A.B.C. in 1939.

In 1932 the Australian Broadcasting Commission was created with the power to collect news, publish journals, and to take over the staff and assets of the commercial operation Australian Broadcasting Company.  On the 1st July 1932, the A.B.C. came into existence, taking over the ownership of all “A” class stations.  From then on, the “A” class stations ceased airing commercials.  Funding came from compulsory listener licence fees until the 1970s, when the Government took over financial responsibility.  Press agencies argued that the A.B.C. should only entertain people; not take over the newspaper’s news role.  However, the A.B.C. was allowed to set up its own news department in 1936.  During WWII, when the commercial stations did little to increase their own news-gathering, the A.B.C. news service developed further.  In 1941 the A.B.C. adopted “Advance Australia Fair” as their news theme (replaced with Charles Williams’ “Majestic Fanfare” in 1952).  Most people used to consider A.B.C. news to be the most believable in Australia.

In 1936, A.W.A. established broadcasting station 9MI on the M/V Kanimbla.  This cargo and passenger ship covered the southern shipping route from Fremantle to Mackay.  The 9MI shortwave transmitter was received by A.W.A. broadcasting stations throughout Australia for relaying the 9MI programs (see separate article).

In 1939, at the outbreak of WWII, all experimental broadcasting and television licenses were cancelled, along with all amateur licences.  After the war, they were not allowed to reopen on the medium wave broadcast band.

WWII gave commercial radio the biggest ever financial boost.  Newsprint was in very short supply, so advertisers looked to radio to sell their products.  As Australian radio stations could no longer depend on transcriptions of American programs, due to supply problems with WWII, Australia had to make its own.  Tremendous influence on the programming of commercial stations was wielded by the two main advertising agencies during the 1940s and 1950s; George Patterson and J. Walter Thompson.  They bought large amounts of air time for all their major clients, especially Lever Brothers and Colgate Palmolive.  They sponsored popular shows such as The Quiz Kids, Lux Radio Theatre, Australia’s Amateur Hour, and Pick-a-Box.  The two top performers were Jack Davey and Bob Dyer.  Money was poured into program production, resulting in the development of more and better programs.  Because advertisers were spending more money with radio, smaller independent production companies also greatly increased the number of shows they made.  They could then sell their shows to sponsors more readily, and could place them on national networks.  Such companies as Hector Crawford in Melbourne, and Grace Gibson and Artransa in Sydney, recorded and sold shows that were also broadcast overseas.  Programs were recorded on transcription records, requiring a special turntable due to their size.  Radio 2GB and 2UE also produced many programs, which were broadcast on their own networks; the Macquarie Radio and the Major networks.  In 1958, the amount earned by the Australian radio transcription business, through sales here and overseas, exceeded one million pounds.

Due to Australia’s war time economy, plus lack of studio and transmitter equipment, and trained personnel, new radio station development stalled during WWII.  However, 41 stations were opened during the late 1940s and 1950s.  WWII also produced other headaches for radio stations.  The wartime Department of Information decreed that all announcements and music had to be approved in advance; no mention of any military operations; and even weather reports and foreign languages were banned as a security measure.  Several stations were ordered to close at sunset, as their signal could be used as a bombing guide at night.  Some were banned from mentioning their callsign or location, and others were closed by the Government for broadcasting breaches of security.  When war broke out, the Army was on standby to destroy all radio studios and transmitters in Sydney, if Sydney was attacked.

Little known are the 29 broadcast stations operated by the Australian Army and the RAAF 1944-1946.  These were in Papua and New Guinea, several Pacific Islands, and even in Japan.  They were used to entertain our troops around the end of WWII.  Announcers plus technical personnel came from enlisted Australian radio station staff (see separate article).

At the end of WWII, there were 100 A.M. commercial stations, and 29 operated by the A.B.C.  All these stations had unique callsigns with a number from 2 to 7, plus two letters.  The numbers indicated the station’s geographical location: 2 for New South Wales, 3 for Victoria, 4 for Queensland, 5 for South Australia, 6 for Western Australia, and 7 for Tasmania.  Later, 8 was added for the Northern Territory, 9 for Papua/New Guinea, 0 for Antarctica, and 1 for the A.C.T.  This all started in 1901 when the Federal Government took responsibility for defence.  N.S.W. was the 2nd Military District, VIC. the 3rd etc.  Australia Post now uses these same numbers for postcodes, and Telstra originally used the same numbers for S.T.D. codes.  The letters have more imaginative origins.  2FC stands for owners Farmer and Co.  2SM stands for St Marks as it started in this Catholic Church.  Location also played a part, e.g. 4CA Cairns.

Experimental F.M. broadcasts started in 1948 in most State capitals, operated by the A.B.C. with classical music.  Little interest was shown in F.M. so the stations all closed by 1958.  The Federal Government then authorised the use of the international F.M. band for television in 1961.  In 1972 the Federal Government decided to introduce F.M. broadcasting on the U.H.F. band.  Before being acted on, this was changed to the internationally recognised F.M. band on V.H.F.  The moving of television stations from channels 3, 4, 5, and 5A, out of the F.M. band, was not completed until 2013.

On Saturdays, sporting fans studied the racing form and listened to commentators describing the races.  During the week when boxing was on, would-be boxers thumped the air vigorously, and gave the fighters good advice.  Cricket fans stayed up all night, and visualised flannel-trousered batsmen piling up runs for Australia.  In the evenings, families gathered around the Bakelite box to listen to comedy, variety shows, quiz shows, talent quests, plays, dramas, news, and documentaries.  “What did you look at while you were listening to the radio?” a 12 year old TV addict once asked curiously, unable to imagine people just sitting.  But, as every radio listener knows, the answer is simple.  You looked at the pictures you made in your own mind.  Radio has always provided the best pictures, because you make them up for yourself.  So the uses of radio seemed endless.  It was the main source of entertainment for the whole family.

Radio created employment for actors, writers, journalists, technicians, and personalities in a way that television has never done here.  Producing and presenting programs was cost effective.  There was room for new ideas and creativity.  Australian radio has always had to live by its’ wits.  However, with the introduction of television in 1956, radio programs changed.  Drama and serials were phased out, and quiz shows moved to television.  An increase in music programs, including Top 40, came in, followed by “Talk Back” and news and sport stations.  Other formats included classical, country, easy listening, Christian, nostalgia, jazz, Aboriginal, and ethnic.

Radio’s story, from the first broadcasting licence in 1922 (2CM Sydney), and the first television licence in 1935 (4CM-TV Brisbane), to the introduction of F.M. and digital radio and television, is partly told in the words of the people who helped to make it such a vital medium.  They are announcers, writers, producers, journalists, and technicians; people behind the microphones, as well as in front of them.  Some of their names are still well known today. 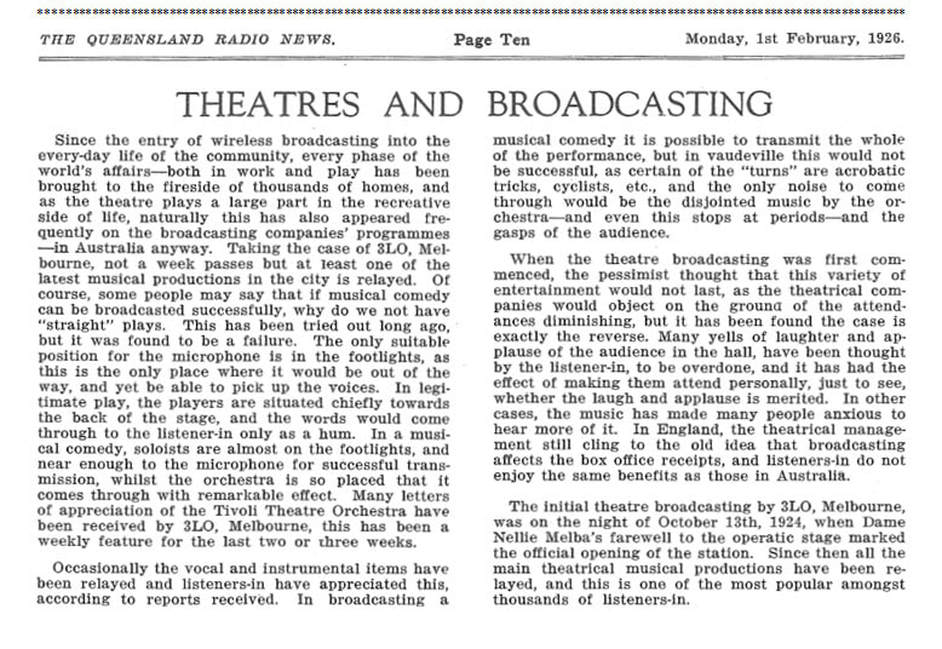