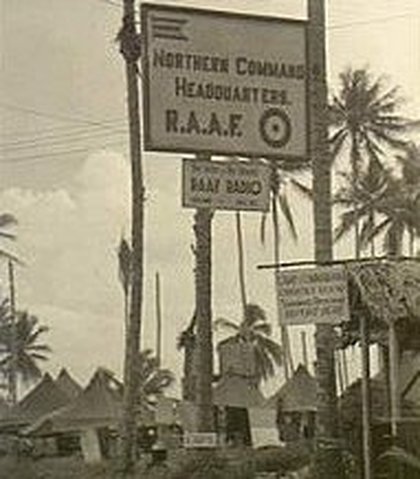 Somewhere, hidden in the jungles of New Guinea, not far from Milne Bay, there is a broadcasting studio in a native built grass hut.  A cheery Australian voice emanates from here, travels along two miles of precarious landline through dense jungle growth, and is transmitted to be picked up by receivers in warships, tankers, Douglas transports, patrol aircraft, hospital wards, and scattered outlying units.  Thousands of Australian and American servicemen are its listening public.  “This is RAAF RADIO – the Voice of the Islands.  We now bring you music of all kinds, light entertainment, news, and sport”.

The accent is on music for that’s what men with time on their hands, who must spend months doing tedious but essential jobs of war in these tropical outposts long for.  To these men, RAAF RADIO has become a great factor in keeping morale high, as the studio’s ever increasing fan mail testifies.  Many units, which were previously supplied with small receivers, were unable to pick up Australian stations satisfactorily.  RAAF RADIO was able to bring these sets into proper use, in an attempt to bring some pleasure to the boring life of thousands of servicemen, with a constant source of good entertainment.

RAAF RADIO’s beginning was a hazardous one.  From the outset, the undertaking was fraught with obstacles.  Flying Officer Ralph Turner bore the biggest burden as their technician.  He was licensed as a ‘ham’ operator in Adelaide as VK5RT, and had the necessary experience to overcome innumerable technical problems.  The station’s old transmitter bore no resemblance to any modern set and had to be completely rebuilt.  Its bandwidth was originally designed for speech only.  The unit set-up demanded that the transmitter should be two miles from the studio, through dense jungle undergrowth.  The only wire available was ordinary twisted telephone cable.  It had to be strung through the dense growth of trees, creepers, and foliage.  Once the lines were strung from the studio to the transmitter, the jungle station’s troubles weren’t over.  American engineers were still making roads through the jungle.  Bulldozers showed a painful lack of respect for the precious wires.  Once, the wires were even shot down.  Eventually the difficulties were overcome by telephone mechanics who laid a second set of wires.

Gradually the broadcast studio and transmitter took shape.  Bits and pieces were scrounged from other units.  U.S.A. units were interested too, and gave odds and ends of equipment.  Transformers had to be designed and hand wound, then redesigned to overcome the effects of humidity.  Gum trees 85 feet tall were earmarked for the aerials, but the natives refused to climb them.  A wireless mechanic was finally found to do the job.  190 records were obtained, and Charles Moses, General Manager of the A.B.C., arranged for 500 a month to be rotated via 9PA in Port Moresby.  At last, on January 26 1944, “RAAF RADIO – The Voice of the Islands”, went on air.  Their hours were 1200-1300 and 1830-2100.

The first two months were a testing period with only a 60 watt coverage and a few records.  Gramophone players supplied by the Australian Comforts Fund for the enjoyment of the troops were adapted for studio use, and an acoustically correct and neatly set out studio was built inside a grass hut.  Announcers included Corporal John Greathead from 2GZ, 2KA, and 4BU, John West from 2BL and 2FC, Leon Becker from 2KM, plus F. Sheppard from 4QG and 4QR.

One unfortunate situation is the very high jungle humidity.  The studio and transmitter equipment are kept dry by several fans. A special oven is used by servicemen to place their receivers inside for a couple of hours every two weeks.  This method dries out the moisture from their receivers and extends their life.  An appeal for receivers to be sent to New Guinea for the use of servicemen included a request that they be properly protected against dampness and mould.

Today, RAAF RADIO is a going concern.  Its new transmitter, constructed along modern lines, produces greater fidelity and range, and has an output of 250 watts.  Thanks to the cooperation of the A.B.C. and the Federation of Australian Commercial Broadcasting member stations, its programmes are wide and varied, consistent with programs currently available on Australian radio stations.  Two new studio quality turntables have been supplied by the Australian Comforts Fund.  Every Sunday night a padre conducts an interdenominational service entitled “Jungle Cathedral”, including sacred music.  For the patients of Australian and U.S.A. hospital wards, regular sessions of popular request numbers are broadcast.  Each Friday evening, the station broadcasts a half hour sport resume by Cyril Angles of 2UW.  This recording is flown from the mainland the previous day.  On Sundays at midday, recorded descriptions of all Sydney’s leading Saturday races are broadcast.  The recordings are made at A.B.C. station 9PA in Port Moresby and flown to Milne Bay.

As would be expected in these areas, good news broadcasts are a must.  Several news sessions daily are broadcast, being relayed from the A.B.C., B.B.C., and also A.F.R.S. There is a separate RAAF RADIO Service Bureau which advertises all local sporting fixtures, local picture programmes, and entertainments.

The work of the staff at this R.A.A.F. operated radio outlet is purely honorary, and in their own time.  They represent the Army and Navy as well as the R.A.A.F.  The men who work it strive to bring greatly needed entertainment to the troops in New Guinea and do it only because they like doing it.  Perhaps soon, as the war moves on towards Japan, the station will also be moved, and the work of initial establishment will begin all over again.  In any case, RAAF RADIO has already done a well worthwhile job.

Editors Note:  During 1944 and 1945 the R.A.A.F. established broadcasting stations at their bases in New Guinea at Milne Bay, Nadzab (near Lae) and Madang, and at Higgins Field (near Bamaga) in Queensland.  The Army also established 25 stations throughout the Southeast Asia and Pacific areas.   All these stations are listed under the separate article “Australian Military WWII Broadcasting Stations”.