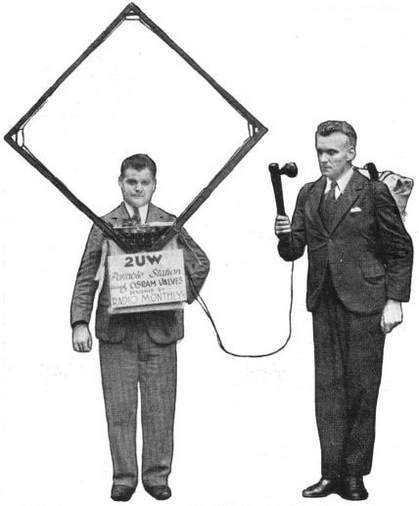 The “Roving Mike” photographed above. Mr. Buckell, on the right carries the high voltage supply in his pack. Otherwise the entire short-wave transmitter is contained in the extremely small outfit carried by Mr. Knock, along with the frame antenna.
For weeks Australia had been talking about the forthcoming opening of the Sydney Harbour Bridge.  Rumours of extensive plans for broadcasting during the big day of celebration culminated in radio 2UW being entrusted the big job of letting the rest of Australia know what was happening.  Everyone interested in radio broadcasting today knows what a great success the undertaking proved to be.  Through March 19th, 2UW, through a chain of 23 stations, kept thousands of listeners throughout Australia fully informed.  Mr. Oswald Anderson, manager of 2UW, decided to develop a new innovation, the “Roving Mike” as an outside broadcast from separate celebrations at the Manly Corso.

It was decided to build a portable shortwave transmitter which could send the signal to a receiver at the Manly Corso wharf.  The signal would then be fed into a landline to the 2UW studio for retransmission to listeners.  It was necessary to design the transmitter so that everything could be carried by two persons and yet provide freedom of movement and access to the microphone.  The photograph shows how this was achieved.  Your writer carried the transmitter, and Mr. Buckell, the announcer, carried the microphone and the B batteries supplying plate current.  The transmitter was designed to fit into an army pack which the writer carried on his chest, and the B batteries were stored in another pack on the back of the announcer.  Two lengths of double flex between announcer and operator provided for connection to the plate supply and microphone.  The microphone was a Stromberg-Carlson solid back Post Office telephone type.

Standard Telephones Ltd. sent along one of their public address systems, which provided four hefty exponential speakers overlooking the Manly Corso wharf.  The output from the shortwave receiver was taken through a line transformer to the landline and also shunted across the public address system.  The result of this was that the P.A. system speakers told of the “Walking Broadcaster’s” doings, and that 2UW could take the transmission over the landline in the control room as required.

During the morning, between live broadcasts from the Sydney Harbour Bridge, the Manly Corso “Roving Mike” was used to interview well known Manly residents.  Then followed a description of a procession from the oval.  The afternoon found us again at the oval where several Olympic sports were in progress.  This gave us the opportunity to interview prominent members of the forthcoming Olympiad, due later in the year at Los Angeles.  We were then offered the opportunity to be taken around the bay in a speed boat with the “Roving Mike”.  We naturally agreed, and with fears for the safety of the loop aerial, hung on for dear life as the aquaplane roared away from the jetty.  Mr. Buckell, in between taking showers of spray, persisted with his running commentary despite the boat just missing the bow of the ferry Curl Curl.  After arriving back at the wharf, we were greeted with cries of “Wonderful! Everything came through perfectly.  The best stunt yet”.  This was great news, except that we were very sorry that at the time, 2UW was temporarily off the air for a respite after their hard day with a very full programme.

Crowds gathered around the “Walking Broadcaster”, as a little later on we started along the front towards the baths for the next big event, as by this time in the evening the unusual stunt had caused a great deal of comment.  2UW was again taking us, and the 23 stations in the Trans-Australia link also.  All went well until we had difficulties getting the loop aerial through the turnstiles.  While at the baths, an official obliged us by describing the events for us as we were not conversant with many of the contestants.  At 11 P.M. the swimming came to an end, and we continued our way back to the wharf.  We then broadcast a final “good night”, switched of our equipment, and willingly removed our now pressing encumbrances.  The experience had turned out to be an assured success, and we packed the gear up with a glow of satisfaction and the knowledge that a lot of useful ideas and modifications had been gleaned for the future.

On the way home, we approached the Harbour Bridge at midnight with the fact that we had overlooked that thousands of cars were waiting to make the first dash across, the moment this great structure was opened.  It took us over an hour to cross amid the smell of exhaust fumes and burning clutches.  Still, that bridge is something to be proud of, and the celebrations of that day gave us a new interest in the utility of shortwave transmissions for outside broadcasts with a “Roving Mike”.