﻿﻿﻿﻿﻿This is the story of Geoff Marshall’s radio career. Born in the Sydney suburb of Lakemba in 1932, he enjoys a happy childhood and his parents are very pleased with his school reports, ‘Geoffrey is showing good progress in all subjects, especially English and the Arts ...’

When every boy reaches puberty, he spends time in the family bathroom studying his physique, the growing stubble on his chin, and in Geoff’s case, the sound of his deep new voice reverberating around the bathroom tiles, all in dizzying rotation till his parents knock on the door shouting, “Hurry up in there!” 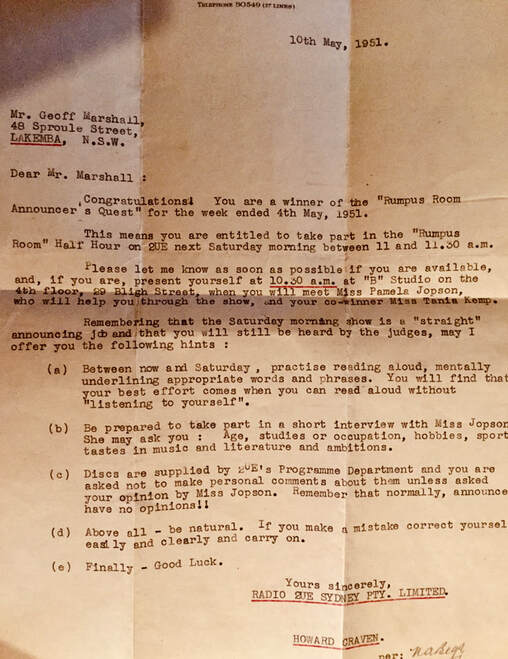 In his teens, Geoff develops an interest in radio programs, ‘Fascinating Rhythm’  ‘Juke Box‘ and radio in general, through listening to Sydney stations whenever he can. In May 1951 age 19, he enters a 2UE Rumpus Room ‘Announcing Quest’, run by popular host Howard Craven at the Bligh St. studios in Sydney. Soon after Howard writes to Geoff informing him he’s won the Quest, including explicit instructions and today, unusual advice for a career in radio ... ‘Remember that normally announcers have no opinions!!’

For Geoff this confirms what direction his future will take, and shortly after following Howard’s advice he posts applications to radio stations, firstly which might accept him as a first time announcer and secondly, which are not too far from Sydney. 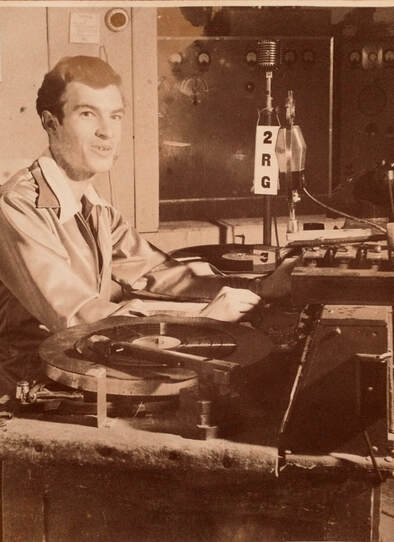 One is 2RG Griffith NSW, and in Oct. 1951, Ray Gamble having started there as a technician and now station manager, is impressed with Geoff’s application and offers him an announcing position. Geoff accepts and shortly after with a new suitcase full of clothes, he arrives in Griffith calling into 2RG studios on the first floor of the Area News building in Ulong Street. Ray Gamble welcomes him, shows him around and confirms his temporary accommodation till he can rent somewhere.

Griffith like Leeton and Canberra was designed in 1914 by American architect Walter Burley Griffin according to a radical design, with wide tree lined streets, ring roads and park. After designing and building their own 100 watt transmitter, 2RG commenced broadcasting in 1936. Known as ‘The Voice of the Murrumbidgee’ they increased power in stages so as Geoff arrives in 1951, they’re broadcasting at a respectable 2000 watts.

Griffith is also a little piece of Italy in the heart of the Riverina. It has the extraordinary statistic that 60% of the city’s population has Italian ancestors. The 2RG funeral announcements are also read in Italian. In 1950, local politician Al. Grassby comes up with the idea of a radio music club in Italian and Spanish languages as a medium for promoting integration, through inclusive cultural and community activities. So when Geoff starts on air, his clear pronunciation and friendly voice is enjoyed by local migrants, many of whom are studying English. For a time he co-hosts the 2RG Friday night Continental Music Club program.

Over the next few years Geoff continues to develop his friendly pleasant style and has the intelligence to use it well. In 1956 when the excitement of the Olympic Games in Melbourne reaches Griffith, he spends time researching competing athletes histories to include with his programs. Appreciated by his listeners, this contributes to his popularity and it’s noticed by other radio people. One is the general manager of Radio 2NX in Newcastle.

In 1958 when the bustling coal city of Newcastle calls, Geoff moves to 2NX and soon builds another audience of listeners, to the point where he features in many 2NX newspaper ads.
So in the late 1950s, Geoff quickly settles into the larger market in Newcastle. Unlike 2RG Griffith, here there’s close competition with 2HD and 2KO which is owned by the Newcastle based Lamb family. Intent on building their media interests, in 1954 they buy 2UE in Sydney and in 1961 successfully apply for the Newcastle television licence, NBN Channel 3 which opens in January 1962. None of this escapes Geoff’s notice as his popularity grows to the point where he’s working 7 days a week, twice on Sundays. 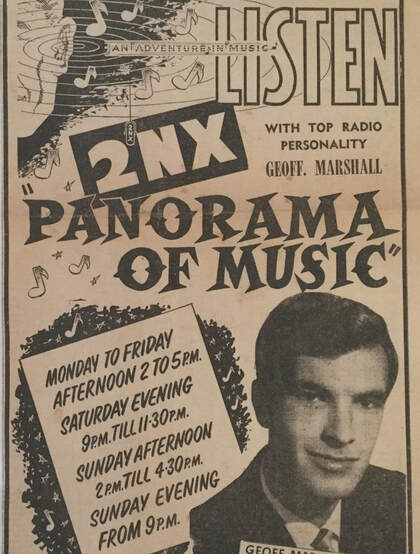 Geoff has written ‘Newcastle Sun, 23-2-1959’ on the back of this Newcastle Herald adv. but shortly after in June 1959, he leaves 2NX to drive south to join the station where he started, 2UE in Sydney. He settles into his new radio position and moves to a new house in Hunters Hill with his wife Molly, when I met them after I joined 2UE in 1959.

I was the panel op. on Garry O’Callahagn’s breakfast program in 1961 when 2UE management decided to visit California to investigate the new media phenomenon, ‘All talk radio’ Owner Stewart Lamb, manager Alan Faulkner with Brian McClenahagn flew to Los Angeles, met radio contacts there and listened to L.A. radio stations. There the FCC had already allowed radio listeners to be interviewed live on their phone, on air, albeit with a 7 second delay. Alan Faulkner and Co. made notes and flew back to Sydney, where from the airport they came straight into the studios to brief program manager Ken Stone. That day I was on the air just before the 11am news when Ken came and told us “Serials are finished, we’re playing music from now on.” This was a shock to everyone on the 4th. floor and next day Geoff and I we were asked to attend a production meeting with Ken Stone. 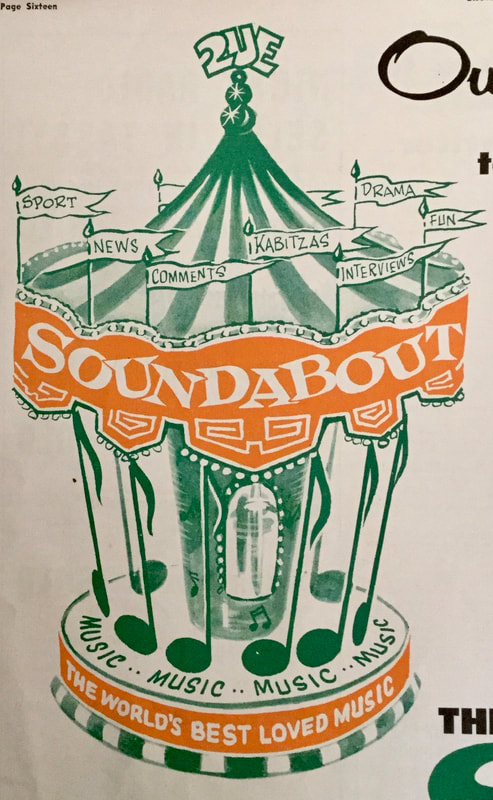 And so the new program Soundabout was born, I believe it was Geoff who suggested the title, and as soon as the new switchboard and gear was installed away we went. In Part 13 elsewhere on this site, I’ve described how the program operated with pre-recorded listeners phone comments being introduced by Geoff, each weekday afternoon. The clever Alan Faulkner and shrewd Stewart Lamb realised what was coming to Australian radio and they wanted to be first in the country, and to educate their listeners in ‘talking on the wireless.’

And Geoff was chosen to introduce this brand new era in radio, and he revelled in it. I moved to working 9am-12 on production, quick lunch, pre-brief then Soundabout 12.30-5pm. And every program was different, at first it was exhausting, recording the comments, editing them, running to the air-booth and back. Then it settled down as we learned how to handle it, eventually I gave each listeners comment a written cue sheet with codes which told Geoff how good the comment was and he was able to work out a suitable introduction on the spot. Some afternoons it was just magic.

Then we had regular callers who I learned to recognise, and some were very intelligent, great radio, and we could all tell Geoff wanted to converse with them, but that was in the future. At 5pm each afternoon Geoff closed our Soundabout program with his “Speed softly and carry a big swinging stick.” I Googled that, now it’s your turn.

I moved to Channel 3 in Jan. 1962 and lost touch with Geoff for a while. 2UE moved studios to Nth. Sydney where he co-hosted a morning program with Ita Buttrose, but the ratings were not good and it closed. In 1987 Geoff with encouragement from Howard Craven moved to 2CHs good music programs, and in the early 1990s he retired to travel with his wife.

To conclude, there’s no better tribute than this, written by reviewer Heather Chapman, published in the Sunday Mirror Sept. 1, 1974.

‘While Bob Rogers is away for 2 weeks his program is being run by Geoff Marshall, a highly competent, extremely pleasant announcer who makes no pretence of being a personality in the sense that Rogers is. In the past 2UE listeners have stayed remarkably constant. They’ve remained with the station when Rogers was away and Marshall was filling in. This is undoubtedly because Marshall is such a professional. He is the sort of announcer who could get a job anywhere anytime.’

Geoff’s story is written including information from his extensive collection of memorabilia, some of which hasn’t seen daylight for 60 years. It was kindly presented to me by his family. Speed softly Geoff I enjoyed working with you on Soundabout, the instant decisions, the laughs, the coffee breaks, the anxieties but above all, the many times it just clicked.

All material and all photos from Geoff Marshall’s collection, ©️Copyright November 2020.