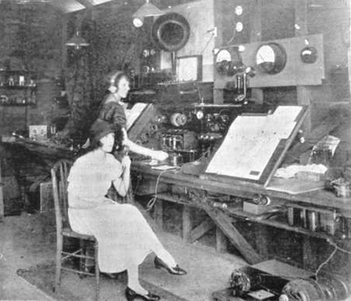 Charles’s station was first licenced in 1911 as a Morse code station (callsign XDM).  Charles broke numerous long distance radio records, including a .0037 watt transmission heard in New Zealand.  He was also often heard in San Francisco.  He was the only Australian licensed amateur allowed to operate during WWI.  Situated at Strathfield after tests atop his family’s Wentworth hotel.  2CM started on longwave 214 KHz. using seven watts with Sunday night classical concerts.

Following new Government legislation, Charles was issued with the first broadcasting licence in Australia (licence number one signed by the Prime Minister, Billy Hughes) in December 1922 (most historians wrongly credit 2SB 23-11-1923, as our first licensed broadcaster).  Charles then received over 2,000 letters praising his first transmissions.

2CM was the first Australian station to publish a program guide, and every program ended with “don’t forget to wind up the cat and put out the clock”.   2CM moved to shortwave on 2-2-1924.  Charles MacLurcan was President of the Wireless Institute following Ernest Fisk and designed and built the popular MacLurcan radio receiver. Callsign 2CM is the only one listed by the Federal Government as “never to be reissued” in recognition of the pioneering broadcasting achievements of Charles MacLurcan.   The photo is of Josie Melville on air in the 2CM studio on 6-3-1923 as Australia’s first female announcer.