The following article is a reprint of an A.W.A. leaflet issued to all prospective buyers of an A.W.A. wireless receiver in the late 1920s.

The Superheterodyne Receiver:  This type of wireless receiver incorporates the very latest ideas in receiver construction.  It will usually receive interstate stations which can be heard on the loud speaker, sometimes without an aerial or earth.  This happens without interference, even when situated in close proximity to a local station.  These advantages are not possessed to the same extent by any other type of receiver.

The Neutralised Receiver:  This wireless receiver, like the superheterodyne, will sometimes bring in interstate stations at a strength suitable to loud speaker listening.  However, in the vast majority of cases, an earth and efficient outside aerial are essential.  Being very selective, it will still receive some interstate stations when situated in close proximity to a local station.  However, if you are too close to a local station then you could suffer from interference.

Tuned Radio Frequency Receivers having Four or Five Valves:  These wireless receivers are excellent for interstate reception while producing loud speaker strength.  Wireless receivers of this type are especially suitable in country districts where there is no local station in the near vicinity.  If installed near a wireless station, they will cause severe interference to the reception of interstate stations.

Two and Three Valve Receivers employing no High Frequency Amplifying Valve:  This class of instrument will give excellent reception strength enabling the use of a loud speaker, if desired, for listening to local stations.  However, it does not possess the required degree of sensitivity to tune in interstate stations as with the four or five valve wireless receivers.  This class of instrument is quite suitable for reception in country districts where there is no local station, as long as careful attention is made to aerial and earth installations.

Crystal Receivers:  Whilst the crystal receiver cannot compete with the valve receiver, either in the matter of range or selectivity, it is an ideal receiver for anyone desirous of receiving only local stations.  However, it must be emphasised that head phones must be used, as crystal receivers do not produce the sufficient power required to use loud speakers.  If it is desirable to use more than one set of head phones, it is essential that they must all possess the same specifications, preferably at least 3,000 to 4,000 ohms, and that they are connected in parallel.  Crystal receivers are subject to more interference than valve receivers, so experimenting with a smaller aerial may produce more satisfactory results.  The chief recommendation of crystal receivers lies in the fact that no batteries or valves are required.  Thus the initial and smaller cost is the only cost.

Installing an aerial to your receiver.  One of the first considerations that arise with the erection of an aerial for broadcast reception is as to whether a long or short aerial is the more suitable.  Both types possess advantages and disadvantages, and the final selection depends to a large extent upon the type of receiver used.  A long aerial, while increasing the range of the receiver, reduces its degree of selectivity.  A short aerial will not have the picking-up qualities of a long one, but with this type it is a simple matter to tune out undesired stations.  Therefore, if you use a crystal receiver, a long aerial is necessary, being capable of picking up the maximum amount of energy.  If you possess a valve receiver, a short aerial would be more suitable.  Country listeners require a longer aerial because they are generally situated at a fair distance from a broadcasting station.

A good average length for the wire is 100 feet for a crystal receiver and 50 to 75 feet for a valve receiver, and must be as high as possible.  It is not a good plan to join up several pieces of wire to make up the correct length.  However, if this is deemed necessary, joints should be carefully soldered.  If the aerial has to be above a building or tree, then it must be as far above as possible.  The aerial must be suitably insulated at the point where it enters the house, using special lead-in insulators, and at the other end.  If the other end is attached to a tree or wooden pole, then the insulator must be at least 2 feet away.  However, if it is attached to a metal pole or other object, then it must be at least 4 feet away.  On no account must any portion of the bare wire touch the house or tree or any other object.  In fact, the section of the wire from the aerial to the receiver must not be positioned so as to run down the side of the house. In regard to the height of an aerial, it must be remembered that the efficiency of an aerial increases with its height.

Current Fire Underwriters Rules stipulate that a lightning arrester, operating at a maximum of 500 volts, must be located as near as possible to the points where the aerial and earth wires enter the house.  If installed outside, then it must be protected from the weather.  Lightning arresters may be obtained from most radio dealers, and detailed instructions are supplied with each instrument.  Aerial wires and their lead-ins must not pass over or under any electric light or power wires to avoid the possibility of contact should either come loose.

Installing an earth to your receiver.  A considerable number of broadcast enthusiasts go to a lot of trouble in erecting their aerials, with a view to obtaining the best possible results, but they totally neglect their earth circuits.  This is probably because the earth connections, unlike the aerial, are buried and out of sight, and therefore more or less forgotten.  The earth circuit is every bit as important as the aerial, and this point cannot be emphasised too strongly.

The efficiency of the earth circuit depends upon three things.  Firstly, the nature of the soil in which the earth plate is buried, and its degree of moisture.  The percentage of moisture plays a most important part in the satisfactory reception of signals, especially when a crystal set is used.  There is always a certain degree of moisture around the roots of trees and bushes, and in the vicinity of a garden hose, and advantage should be taken of this.  In dry weather a few buckets of water thrown over the spot where the earth plate is buried will usually improve the reception of signals.  Second, upon the size of the plate or water pipe which is buried in the soil, and in the way in which the earth wire is satisfactorily connected to this plate.  Lastly, and equally as important, upon the length and total area of the wire or wires connecting the receiver to the earth plate or water pipe.  The earth wire should be as short as possible.

When an earth plate is used instead of a water pipe, it must consist of a sheet of galvanised iron about 4 feet by 2 feet.  The strands forming the earth wire should be untwisted for a distance of 2 feet, and each strand carefully soldered to the sheet at well-spaced points on one 4 foot edge.  This completed, the plate is buried edgewise, the edge to which the wires are soldered being uppermost, just deep enough to cover this edge.

When a water pipe earth is used, it is most important to solder the earth wire to the pipe as near the point where it enters the ground as possible.  If this is not done, reception may be seriously affected by the joints in the piping.  As an alternative method to soldering the earth wire to a water pipe (which is not always an easy job), a special clip fitted with a terminal to take the wire may be clamped to the water pipe.  This method is quite satisfactory, provided that the water pipe and the inside of the clamp are periodically cleaned with an emery cloth and then wiped with a dry cloth.  Gas pipes should on no account be used for earthing the receiver on account of the risk of fire and explosion.  This method, apart from being most unsatisfactory, is prohibited by the Fire Underwriters Rules.

Installing a receiver in your house.  Let us assume that you have erected your aerial and installed your earth, following the directions exactly as laid down in these installation notes.  A small table should now be procured and placed as near as possible to where the aerial and earth lead-ins enter the room.  The receiver is to be placed on this table.  The next duty is to obtain each valve and cause them to be inserted into their sockets.  It cannot be emphasised enough that care must be entertained in matching each valve to the correct socket.

The filament lighting battery, whether dry cell or accumulator, and often referred to as the “A” battery, should be connected to the receiver, taking care that the “+” and “-” terminals of the accumulator go to their respective “A+” and “A-” terminals on the receiver.  The positive terminal of the “A” battery is either marked “+” or is painted red.  An operation to confirm the correct connecting of the filament battery is now essential.  The battery switch and the filament rheostat are to be turned on for a moment to make quite sure that the valves light up. 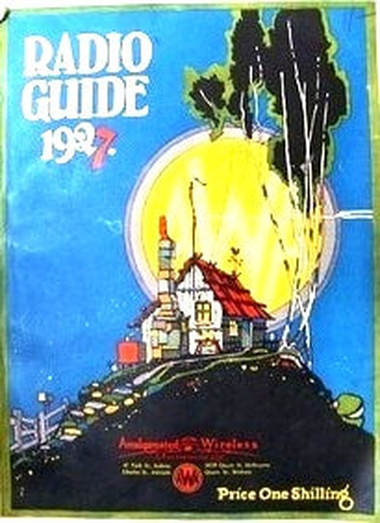 Next, connect up the bias or “C” battery (if used) and finally the high tension battery, often referred to as the “B” battery.  In both cases great care must be taken to ensure that these batteries are connected up the right way round; that is, the “+” battery terminal to the “+” terminal on the receiver for that particular battery.

Having completed this, join up the aerial and earth leads to the receiver.  It must be pointed out the necessity of attaching the aerial and earth lead-ins to the correctly marked connections.  Next, plug in the headphones or loud speaker, switch on the filament battery, and turn the filament rheostat until the valves are burning at the required brilliancy.  One of the local stations should now be tuned in with the variable condensers, and the filament control given a final adjustment for best results.