This is a republication using material from our old website.  Every ANZAC DAY I like to make related material available here on the site.  I see it as part of my goal to raise awareness of the wonderful work produced in Australia by a large number of very talented people who may be largely forgotten today, and frankly, shouldn't  be.  So I will put this page up for about a week and then remove it until another ANZAC Day in the future.  Enjoy!

Ian Grieve,  (sadly Moris Sztajer is no longer with us) 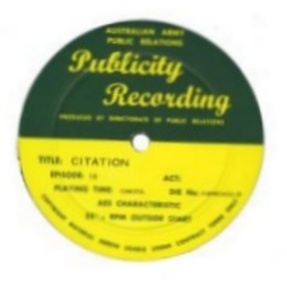 Citation is a radio series, produced 1960-1961, comprising 39 self-contained quarter hour episodes (running time around 12 minutes) , dramatising the events leading to the awarding of the Victoria Cross (V.C.), Military Cross (M.C) and other important awards or actions. The Series was produced by Australian Army Public Relations (A.A.P.R.) and is copyright by the Australian Government. It was made in Melbourne at the A.W.A. studios using Melbourne radio actors like Roly Barlee, Carl Bleazby, Syd Conabere, Robert Peach and Keith Eden and was Directed by Donald Crosby.
As the introduction to each episode says: “Citation! Presenting authentic stories of heroism and gallantry, taken from the histories of war.” This series is not about glorifying war, it is about learning more about individuals and their actions. CITATION was made only a short time after the end of WWII and the Korean war and details were fresh.

In 2004, Radio Transcription Collector Craig Nugent, a member of the Australian Old Time Radio group, made a discovery of a large number of Radio Transcription Discs which included the Series CITATION. Discussing the find later with other members of the group, the Moderator of the group, Ian Grieve, indicated that the series had such historical value that it was important that it be shared with all Australians, rather than sit in an individual collection and never heard except by that individual. Craig agreed.

Later in the year Ian Grieve traveled to Canberra to a meeting with Defence Public Relations and discussed getting permission to include (A.A.P.R.) representative episodes in the Encyclopaedia of Australian Radio Shows database (EARSdb) and also making series like CITATION available to the general public for free. Verbal and written approval was quickly given for the EARSdb project and verbal approval for CITATION. Now written approval has been given to make CITATION available on the Internet in mp3 format for free download.

We want Australians to learn more about their history. Very few know about our War Heroes, nor the individual theatres of war and areas of battle. The broader terms Boer War, World War I, World War II, Korean War and Vietnam are as much as those born afterward recognise, however those who lived through the battles or listened to the daily radio reports and read daily newspapers knew the individual areas of battle and the names of each action very well. We envisage teachers and students researching VC and MC award winners from their local towns or states and learning more about those people and our history. Please email me and correct my spelling for names I have written phonetically from the series. You are also very welcome to email me with the results of your research into these men and the battles in which they were involved. We will try and include some on the website even after the episodes are withdrawn at the end of April.

For those who think the bravery is all about men, there is another series based on the book by Sister Betty Jeffrey, called ‘White Coolies’ about the nursing sisters captured in and around Singapore and what they went through in prison camps. In the meantime read the book or watch the movie ‘Paradise Road’. I have listened to each episode of Citation, several times. They make you think about your heritage and what these men went through for their mates and for their country.

Listening to radio drama when you aren’t used to it can be difficult. Radio drama uses the same imagination as reading a book. For those listeners more television oriented than books, you may need a dark room without distractions to pick up all the sound effects and dialogue and become engrossed. If you are a descendant of one of the subjects of the series or related in some way, please take the time to write to us and tell us how you felt about hearing this series. Feedback from listeners would be appreciated as we have further projects, including making other Australian Army Public Relations titles available in the lead up to future ANZAC Days. The copyright holders would also appreciate the feedback.

We are interested in hearing from anybody involved in the radio production of this series. Please respect the spirit in which this project has come about and do not sell these episodes. If you see them for sale, please advise us. Discussions continue with the copyright holder for a future release of collector sets of the series on CDs for descendants, collectors or internet challenged, if this experiment proves successful. Thank You

We owe a debt of thanks to Craig Nugent for unselfishly making these shows available from his personal collection. We would also like to thank the Department of Defence Public Relations and the Australian Government for allowing us to make these shows available to you. We would also like to thank the National Film and Sound Archive for providing episodes 37 and 38 which were missing from the set. We were able to supply NFSA with two episodes they were missing and now the sets are complete and protected for future generations of Australians.

Here they are for you to listen to and remember these inspiring stories.

Ted Kenna took on a bunker and machine gun post with his sub machine gun until his magazine was empty, he then used his rifle and killed both gunners.  All the while he was standing,  Bullets were passing all around his body, even passing between his arms and body.
EP22 Damian Parer Australian Cine War Photographer  Every Australian has seen his work.  The Fuzzy Wuzzy Angels helping the wounded, the blind soldier helped across the creek.  Its a brave man who is in the thick of action armed only with a camera.
EP23 A Story of Valor Sgt. John Morrison - Port Melbourne  A skirmish behind enemy lines in Korea, taking on superior numbers and then fighting back to Australian lines.
EP24 YANK  Nathan Van Noy - Congressional Medal of Honour winner from Idaho.  Van Noy at 19 years of age attacked 2 barges of enemy landing at Scarlet Beach New Guinea.  He fought on with two shattered legs and multiple wounds.  The Japanese threw everything at him, grenades, flame thrower, multiple snipers and he refused to withdraw.
EP25 Lt. Col. Charles H. Green  An unusual story of Korea and an apple orchard.
EP26 Pte J.H. Stafford U.S. Silver Star - Perth  In Korea and Stafford took on a tank with a Bren Gun.....and won.
EP27 Men of courage SIO Mission  Sgt Herring - Victoria, Corp McNee - Footscray, Corp Hamilton - Victoria, Corp Drew - Glenhuntley, Private Cameron - Victoria, Sgt Major Ryan - Fish Creek Victoria.
EP28 Flt. Sgt. RH Middleton V.C.born Waverley NSW, date of Action 28-29 November, 1942 raid on Turin  Story of Bomber Pilot Middleton and the bravery he showed in getting his crew home.
EP29 Capt. Robin K. McLaren M.C.+Bar M.I.D.  Army goes to sea, the story of "Admiral" McLaren and his work afloat behind Japanese lines.
EP30 Capt. McNamara  An inspiring Leader.  McNamara's men wrote their own citation when they lost their leader.
EP31 Lt. Antony Campbell  Jungle warfare in Malaya.
EP32 Capt. Lionel C. Matthews G.C.M.C  Held as a prisoner at Sandakan, he organised escapes and ran the intelligence organisation from within the camp.
EP33 Shaggy Ridge PNG.  Stories of Heroism and medals won there. Lt. J.R. Denman, Private Lugg (QLD), Lance Corp Green (Footscray), Sgt Hendrikson (QLD), Corp Bugg (Tasmania), Private Begally.  Its the first I have heard of this action and I am guessing at the spelling of some of the names, so please correct me if I am wrong.
EP34 Sgt. James Rogers V.C. - Riverina  The first Australian VC winner, during the Boer War 1902.
EP35 The Glosters  The Glosters in Korea. 5 Officers and 35 other ranks were all that survived from the Glosters original 622 Men.  They faced 30,000 enemy of which some 15,000 died.
EP36 ANZAC  The story of the ANZACs. Citation in verse written by author Edgar Wallace
EP37 Capt G.H. Vernon M.C.  Kokoda and the story of 'Doc' Vernon.
EP38 Lt David John Manet M.C.  For inspired leadership.  His platoon held their position.
EP39 Captain Sherlock  Black Cat Mine in PNG