The first radio station in the world in an operational train, was A.W.A. station 2XT, travelling around New South Wales.  2XT was part of a mobile “Australia Made” exhibition known as the “Great White Train”.  A.W.A. used one of the 15 carriages for their studio, transmitter, A.W.A. product exhibition, plus staff accommodation.  The 2XT transmitter was rated at 500 watts and operated on 1175 KHz.  The train travelled 72,000 kilometres from November 1925 to December 1927, stopping at over 100 towns for five days each (Gosford was the first).
2XT broadcast pre-arranged local advertisements each day from 4PM to 5PM and from 7PM to 8-30 PM, and conducted public tours through their studio.  In most towns they also broadcast welcome speeches from local dignitaries.  Their antenna was a single wire 20 metres long on a 13 metre high mast mounted on top of the carriage.  The railway tracks were used as an earth.  The mast was folded down along the carriage during transportation.  Reception reports were received from all over Australia, plus New Zealand and New Guinea.  Pictured is a promotional leaflet distributed in each town visited.  The above photo was taken on 9-1-1926 at the Merrygoen railway station.  The 2XT Sales Manager, Charles Coldwell, was later the first Station Manager at 2GF Grafton.

3YB was a mobile radio station touring regional Victoria from October 1931.  They started with a model “T” Ford housing a spring-loaded 25 watt transmitter on 1145 KHz., towing a trailer with a power generator, and a model “A” Ford with the studio (both painted scarlet).  Vic Dinenny was manager, announcer, and cook; Bert Aldridge was their technician, driver, and mechanic; and Bert Rennie looked after sales, schedules, and copy-writing.  Their temporary tower was often knocked down by cows. 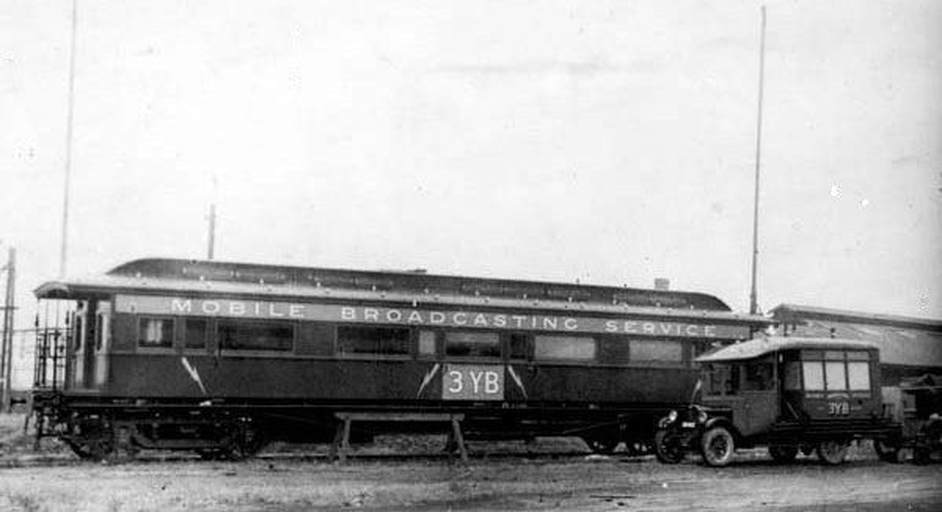 From 17-10-1932 they rented the Royal train carriage for twelve pounds per week.  The carriage housed their studio, 50 watt transmitter on 1060 KHz., and beds for the staff.  They also had a power generator for use if local power was not A.C.  It took 13 minutes to raise the antenna system, and attach earthing and power to go on air.  3YB had 1,000 records and used a six metre collapsible tower at each end of the carriage.  Their licence allowed them to operate anywhere in Victoria, at least 50 kilometres from any other station and 3 kilometres from any Post Office.  They were on air 1830-2230 daily for one week in each town with the same program.  An agent visited each town in advance to arrange advertising.  Listeners were always invited to visit the station.  Requests were welcome, with listeners being asked to make a donation to their local hospital.  All programs were live, including the participation of visitors.  News and feature programs were broadcast via landline from Melbourne.  Their opening broadcast was from Creswick.  They also operated from Colac, Yarram, Trafalgar, Horsham, Clunes, Traralgon, Warrnambool, Bairnsdale, Warragul, Leongatha, Wonthaggi, Korumburra, Camperdown, Port Fairy, Mortlake, Rushworth, Seymour, Murchison, Shepparton, Numurkah, Yarrawonga, Cobram, Echuca, Kyabram, Rochester, and Terang.