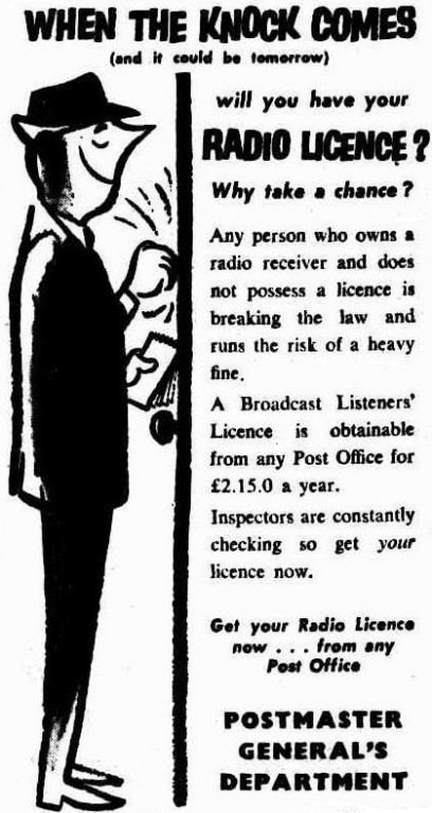 CANBERRA TIMES 18-10-1958
Can anyone remember when the P.M.G. came around to check that you had a valid radio receiver and television licence?  (The one millionth radio receiver licence was issued in 1937).  During the 1930s the Radio Inspectors often took people to court who didn’t have a licence.  For those unlucky enough to be convicted of refusing to obtain a licence, there was a maximum 20 pound fine waiting for them. Considering that the weekly wage was around 14 pounds at the time, this fine was rather hefty - evasion was treated as a very serious offence in those days! Given that a licence for one receiver at the time cost around two pounds (the price varied depending on distance from the closest A Class station) it is hard to understand why people chose to try their luck.  For most first time offenders, the usual fine was two pounds plus court costs.

The Post Master General often placed advertisements in newspapers across Australia warning that house-to-house inspections by Radio Inspectors were imminent.  Many people hid their radio and television aerials in attics and chimneys, and radio and television receivers were often hidden in cupboards in an attempt to fool the Inspectors.

Commonwealth agents used a device to measure RF frequencies generated by radio equipment which operated in a similar way to how radar detector detectors work. Reliability isn't great but when there is a signal coming from a house with no antenna, officers were entitled to be suspicious. There was, however, little way for officers to know that more than one receiver was being used in the same house without an inspection of the house. Another way for listeners to avoid detection was to use crystal sets - receivers that didn't use electricity to operate but merely soaked up radiation from the airwaves by the use of a crystal diode and a pair of very sensitive headphones.  Crystal sets couldn’t be detected.

By the 1970s, combined radio and television receiver licences could be bought for $26.50, however the end was nigh.  On the 18-9-1974 the Federal Government decided to drop licence fees due to the high cost of monitoring compliance.  The ABC, which had been financed by the licence fees, was then funded by general taxpayer revenue.  A plan to reintroduce a combined radio and television receiver licence in 1975, costing $70, was considered but dropped.