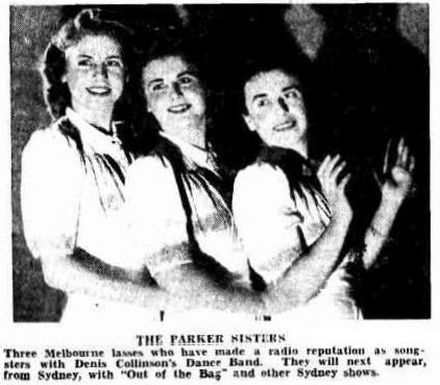 Singing trio the Parker Sisters - Pat, Marie & Eula began their singing career as young girls.  Descended from generations of musical families, it was inevitable that these girls would be musically gifted. The nurturing of their talent by their parents Bert & Elaine (Lizzie) Parker (nee Herry) ensured that the girls attained the highest grades in Piano and a knowledge of musical structure.  Bert, who worked as a law clerk, was a fine baritone singer and musician, and Lizzie a highly qualified piano teacher and pianist would have set the bar high for their three girls.  The Parkers were deeply involved in their rural and city communities and often organised fundraising events which inevitably featured one or all of the girls. During the family annual holidays to Hepburn Springs they were recognised as the best entertainment at the guest house.  As a result of this the Parker girls were well used to the stage when they commenced singing with Harry Jacobs’ band at the Palais Picture Theatre in St. Kilda in the late 1930s.

But the girls had their eyes set on bigger things (most probably with encouragement from their parents) and in August of 1939 Pat wrote on behalf of the trio to orchestra leader, Harry Bloom, requesting an audition.  Their success at this audition led to a long national and international career.  Their original style was strongly influenced by the Boswell Sisters but with guidance from their band leaders, they soon developed their own unique sound and arrangements of popular songs of the time.  But they didn’t let their success with the ABC go to their heads – they maintained their day jobs as secretaries until they were certain of a regular income and continued contracts.  With the ABC expecting formal wear for all broadcasts the girls set about making all their own clothes with limited wartime materials and  there was no chauffeur driven cars - their transport to the studio was the local tram from Middle Park.
During the war years they followed the family tradition and gave generously of their time to fundraising and charity events.  They spent a lot of time at the Heidelberg Repatriation Hospital with the returned injured troops broadcasting with Bob Horsfall on 3UZ. They flew interstate in troop planes to entertain soldiers, sailors and airmen at camps and bases.  And contributed to the war effort by recording the War Bond song for the government campaign. The U.S. troops didn’t miss out either and this now nationally famous trio stood proudly on the stage when U.S. comedian Joe. E. Brown visited the country in 1943 to entertain the Australian based U.S. troops.

The Parkers were associated with many radio stars of the era - Geoff Brooke, Peggy Brooks, Margot Sheridan, who became a very close family friend, John McMahon, Marjorie Stedeford, Bob Horsfall, Jim Gussey, Denis Collinson, Isador Goodman, Joan Clarke, Pam Corrigan, Bob Gibson, Horrie Dargie, Norman Banks, Stella Lamond, Max Reddy, Dick Bentley, Dick Cranbourne and many more.
The girls had worked with piano-accordionist Lou Toppano since the time of Harry Blooms Orchestra and it wasn’t surprising when Marie became Mrs Toppano in 1945.  But despite rumours of the end of the Parker Sisters singing career, the girls continued on as a trio and in 1946 were invited by British Comedian Tommy Trinder to join him at the Tivoli Theatre in Melbourne. It wasn’t long before the lights of London were temptingly shining.  In 1948 Pat married Warwick Spencer (who also came from a musical background) and in the same year Marie and Lou had their first child.  In the meantime Eula continued to pursue a solo career.  In 1946 she partnered John McMahon and Margot Sheridan in the “We Three” programme and when Lou branched out on his own she was a regular feature with his Tango Band.

During the Royal visit in 1954 the girls were invited to perform at the State Reception in the Exhibition Buildings, and Eula also performed with Lou’s band at the Royal Performance.  In the same year Eula wrote and released “Hullo Cocky” recorded with Dick Cranbourne. But television was soon to become the new entertainment medium in Australia and the girls and Lou grew with it.  In 1960 Marie presented “Getting Together” with John Stuart on GTV9 having previously working with him in the 3DB Happy Gang. Lou was musical director for HSV7s Sunnyside Up. Pat too continued in the industry and was appearing on television and working behind the scenes writing and recording jingles with Bill Armstrong, Bruce Clarke and BEA.

Eula however was not content at home and felt more opportunities would be available to her in England and she was right.  By 1955 she was settled in England, and although things didn’t start smoothly for her, she eventually replaced Australian Marie Benson of the Stargazers featured regularly on British television and once again performed for the Queen. She then branched out to develop a solo career. She also went on to write her most famous song “The Village of St. Bernadette” which she sent to Andy Williams who recognised it’s potential to be a hit.  In 1960, Eula was presented with the Ivor Novello Award for her world-wide hit song. Eula returned to Australia in 1957 and 1962 but the U.K. was now her home and the Parker Sisters singing trio was finally no more.  Pat and Marie however, continued to work together singing with 3DB in “It all points to fun”, writing pantomimes, and developing television programme ideas and Pat went on to write a “b” side hit for Horrie Dargie titled “Fish & Chips”.  Lou and Marie developed their own music school and nurtured the stars of the next generation.

But the artistic talents of these girls never died.  Pat went on to become an author of children’s books, her well-known “Hustler’s Gold”, which included her father’s stories of life as a child in gold rush Bendigo, is still recognised as an historical reference book.  Marie and Lou finally retired to the Gold Coast in 1979 – but sadly Marie died in the same year. Eula passed away in Surrey England in 1985 and Pat lived to be 91 and died in Queensland in 2009.  These three amazingly talented Australian women described in 1954 as “the best Australian singing group of its kind” played a major role in the success of radio and live entertainment, but have like many other stars of the time been lost in history. They have left a legacy of an amazing musical sound that is being studied by music students of today.
Their families have donated their memorabilia and manuscripts to the State Library of Victoria, where digital transcripts of their music (by Geoff Orr of Lyric) also remain for posterity.

With much thanks to Geoffrey Orr & Lyric Music For permission to include the audio.  Thanks to Originator Jamie Kelly whose collection and generosity makes it possible.