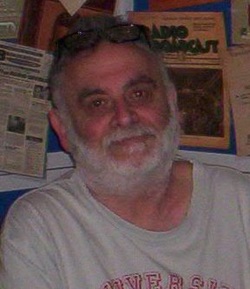 This one is the hardest to write.  Moris passed away in 2012 and I kept telling myself I needed to sit down and write an article about him.  I guess now in 2014 it is the time to do it.

I first met Moris around 1999/2000 when I first discovered Old Time Radio, as the hobby is called.  We met on the internet in an Old Time Radio Chat Group hosted in the U.S.  Wow, now its starting to sound really weird :)

At that time I seemed to be the only Australian interested in listening to old radio shows and discussing them with others.  Then Moris turned up and introduced himself to the group.  We started chatting about Australian Radio Shows we knew, he knew more because he was older, he'd actually heard them 'first time around'.  We discussed the fact that it was frustrating that none of the Americans knew about Australian Radio Shows, in fact they firmly believed Australia didn't have any of their own, they just remade shows from American scripts.  That argument fell flat when you asked them about Yes, What! or Search for the Golden Boomerang, Blue Hills etc.  They had no idea those shows existed.
Moris and I were very similar.  We were both married, our wives had no interest in listening to old radio shows, even though we both tried to interest them.  They thought we were wasting our time.  Moris lived in Melbourne with his wife Anne and his children.  I lived in regional Queensland with my wife Dawn and our children.  Although we discussed our kids and grandchildren and updated each other on what was happening in our families as the years progressed, virtually all our talk was about what happened with Australian Radio in the 1920's to 1960's time period.

Moris and I were both annoyed that Screensound, as the National Film and Sound Archives were known at the time, had very little information online about Australian Radio Shows and Radio Actors, apart from a web based list of their own holdings, which amounted to about 700 series/serials and American researchers thought it was a list of everything Australia produced.

We didn't know a whole lot more at the time, but we wanted to learn and we wanted to educate others about this important section of Australian history.  We made contact with other interested people, started a dedicated yahoo group we called Australian OTR Group and started researching and documenting.

Moris was a computer programmer, website developer and database developer.  Who could want more in a research partner?  While Screensound was telling the Australian Government in their Annual Report, that there may have been as many as 1,500 Australian Produced Series and Serials, we had documented over 4,000.  Moris spent all his spare time in the Victorian National Library photocopying copies of Listener In magazines and Newspapers.

We would be working on projects and at the same time either emailing our results to each other or using 'chat' features in programs we were using.  It was like working in the same room  at adjoining desks.  Working away but having a conversation at the same time.  Bouncing ideas off each other, asking questions, getting answers and following other leads.  Scrolling through newspapers cutting and pasting information, repeating snippets of news we just read, to each other. It was a fun way to research.

We were fortunate to make contact with collectors Craig Nugent, Jamie Kelly, Alan Heinecke, Dave Riddell, other Australian OTR Collectors who liked the idea of finally documenting Australian Production.  They gave us access to their collections and in particular, their knowledge. 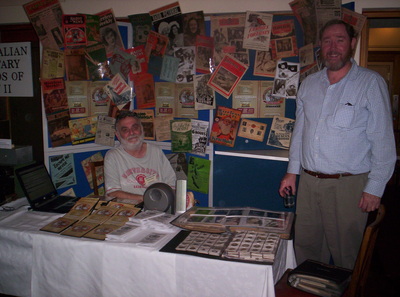 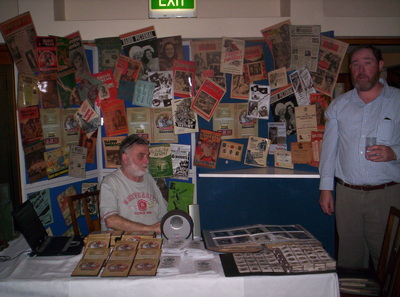 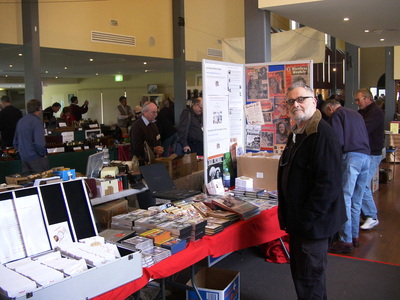 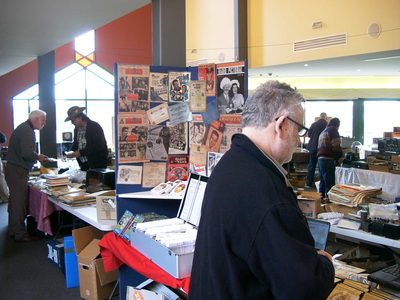 We also made contact with the man who became my mentor, Mr Reg James, who spent his working life at Grace Gibson Productions, starting in 1946 as office boy and working up to become the Manager until his retirement.  Reg was able to help Moris with information, corrections and importantly, the real story of how things were done and why they were done that way.

Moris and I met face to face about 6 times.  We met at Screensound in Canberra once where we were conducting research.  We met at Reg James place along with Craig Nugent.  We attended and had a display table at two bi-annual Radio conventions in Canberra.  I traveled to Melbourne with Dawn after I had been diagnosed with cancer and before treatment commenced, so I could catch up with some of the collectors and family along the way and Moris, Dawn and I had dinner after we all spent time with Craig Nugent.  Dawn and I also traveled to Melbourne the week before Moris passed away from his cancer, after Anne told us it was time to make the trip.  Jamie Kelly also met up with us at the Hospice to say our goodbyes to Moris.

It is strange, how close you can become to someone you have infrequently met.  We emailed or chatted most days for about 12 years as we documented series or people involved in radio.  We just worked well together.  Every time I work on a radio Log or scan through the 'Listener In' newspapers he digitised, I read something I want to tell him about, but he isn't there.

I did stop researching for a while after Moris passed away.  Anne sent his papers, discs, books, Laptop and all sorts of things involved in our research and it was a reminder that I had to continue for both of us.  At least, I took it that way.

When Dawn and I visited Moris in the hospice, Moris was telling me what he was going to be doing, with regard to the research, when he got back home.  He was so sure he would and his cancer was just a bit of a road block.  This was the first time we met Anne and we have been in regular contact ever since.  Swapping updates on family, grandchildren etc I don't think she listens to old time radio shows still, but you never know.   The following week after our visit, Moris passed away.

I wish Moris had given me some lessons on writing html and databases, but we simply ran out of time.  We had a lot of plans for the research and now it is up to myself, Craig and Jamie and the rest of the gang to keep it all going.  The Encyclopaedia of Australian Radio Shows database (EARSdb) would never have commenced and the over 6,000 series/serials would never have been documented if Moris had not decided it had to be done, and he had the skills to do it.

We certainly miss you Moris and we are proud of what you achieved.  This website shows that the work you started is continuing.