Each issue we highlight a Radio Club and give you, the reader, all the information we have on that club and ask you to help us to fill the gaps in our knowledge.  As you can no doubt guess, this issue’s Radio Club Highlight is the HOWIE WING AVIATION CORPS.  Before I tell you what we know about the club, I will give some background information so that you know why this Club has been chosen for this issue.

Kathy Hammel and her husband Jim, mp3 Old Time Radio Collectors in the U.S.A wandered into a 2nd Hand Record shop in California one day a couple of months back and spotted a 16" Transcription Disc hanging on a wall suspended by a push pin.  It was a Kellogs disc with ads 1-6 on side 1 and 7-13 on side 2.  Kathy didn't know a lot about 16" Transcription discs, (see Craig’s description elsewhere on this website) and had only ever seen one before hanging in a museum, so she was unsure it was genuine.  In a bin below the hanging transcription she found 2 more 16" records with a World Broadcasting System red label, and a third pinned up on the wall opposite where the transcription with the ads was hung.  The episodes were 77/78, 81/82, 83/84 of a series unknown to Kathy, Howie Wing. 79/80 was missing, along with about 250 others, but Kathy was not to know that then.

Kathy then made contact with Jack French, OTR author and  researcher and his excitement left no doubt the discs were genuine.  Jack put her in touch with Jerry Haendiges who now has the discs and is working to recover the shows.

Jack French put Kathy in touch with Karl Schadow, another researcher, and Karl went to work researching Howie Wing.  During Karl’s research he discovered a document that indicated Howie Wing was also broadcast in Australia and so Kathy contacted me to see if I was interested in researching Howie Wing in Australia.  I sure was!  Later I returned the favour by involving Archie Hunter in Canada when a trail led to Canada where Howie Wing was also  broadcast.


During their research Karl discoverered that there was one more surviving Transcripton Disc of Howing Wing in the U.S. Library of Congress. Archie found one more in the Library and Archives Canada.

Okay, that is the background to the story.  At the moment Howie Wing research in Australia, Canada and America are continuing, here is what we have discovered thus far in Australia.

It would appear that Grace Gibson brought Howie Wing to  Australia during her term visiting Australia setting up ARTRANSA.  In 1938 there was no protection for local actors or writers in place so the series was played from U.S. Transcription Discs and not re enacted from U.S scripts. This means that the shows were the original U.S shows with the original U.S actors.

Howie Wing was sponsored by Kellogs and a Round The World race was set up and used as the launchpad for the series http://www.wingnet.org/rtw/rtw002ee.htm

Then we have copies of 16 different flying lessons by MacKenzie that appeared in the on-going editions of the Weekly. The edition of February 10,1940 starts his column with "The Howie Wing series over 2CH has come to a close, and this is our final Howie Wing column in "Wireless Weekly".  The logos I have at the top of these pages come from the top of the weekly columns in Wireless Weekly.

Basically Howie Wing was a 21 year old learning to be a pilot.  He had lots of friends doing the same as well as a few enemies.  We know many of the actors and those responsible for the series, what we don’t know is what series came to Australia.  Did Australia get both U.S. series or did we get series 1 or series 2?  There presumably was meant to be more series, but unfortunately the Originator/writer Willfred Moore died and for some reason he wasn’t replaced.  Because the Howie Wing scripts survive in the U.S. if readers can email us with memories of the episode/storylines they remember, our U.S counterparts can compare them with the Scripts and tell us what series they belong to.

What we don’t know, is why Robert McKenzie MC and how he was chosen. 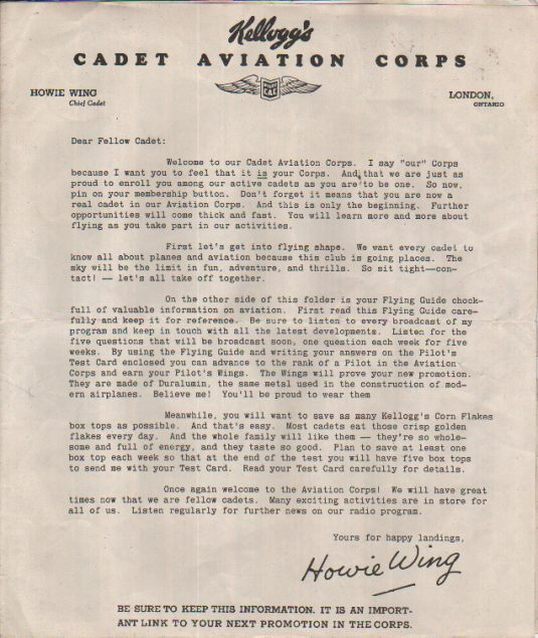 Joining the Howie Wing Cadets was via 2CH in Sydney.  A letter similar to this Canadian one on the right was received and each member also received a Howie Wing
Badge. (Below)

There was also a Howie Wing Handbook given to members.  The Howie Wing Club also seems to have been the first joint Radio Show/Kellogs promotion in  Australia.  If there was a prior one, please let me know.  After Howie Wing finished it was replaced by Martins Corner and then after that we had
Smoky Dawson, so the Kellogs relationship with radio continued. 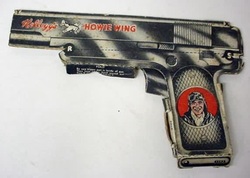 There were plenty of Howie Wing premiums, including some pictured here, like the cardboard Rubberband Gun, and the Medallion that could be purchased with box tops.

There were also Aeroplanes of the World that could be cut out from the backs of Kellogs packs and stuck into a Howie Wing Album, as well as a Howie Wing game. 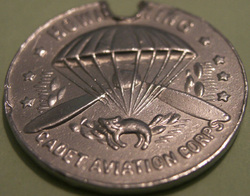 If you have any Howie Wing Premiums please tell us about
them.  I would love to include copies on the website and add the information to what we know about the series. 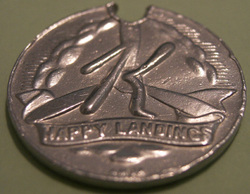 All in All, Howie Wing had quite an impact on the  youths  of  Australia.

If you were a Howie Wing Cadet, why not tell us about your experience and what you enjoyed about being a member and also what you remember about the radio program. 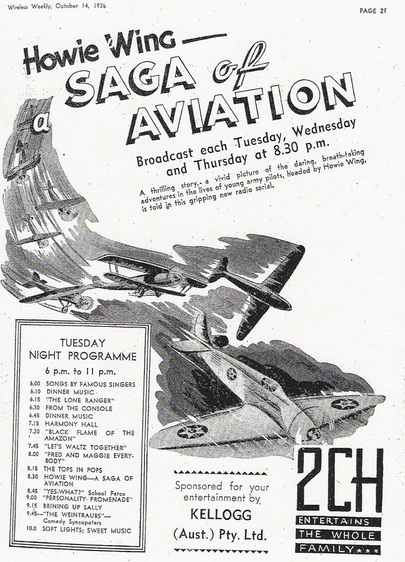 Whilst Howie Wing was huge in America and Canada, it seems that it was even bigger here.  No examples of the flying lessons or weekly columns have been found in the other countries to date.

Archie Hunter in Canada also has a theory that the episodes there were altered to reflect local conditions, certainly that was a common practice in Australia in later years and other series, but at this date it would have been the common practice to  simply play the Radio Transcription from the U.S 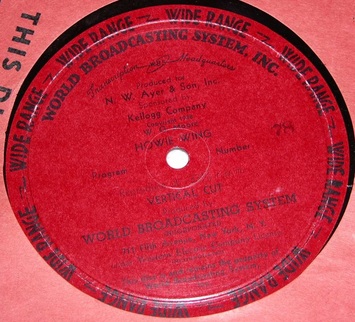 If you have any surviving examples, please let us  know.  We are willing to make transfers to CD for you so that you can listen to them yourself.  Fortunately Radio Station staff were fans of the various shows and most surviving episodes of  series and serials are as a result of staff ‘rescuing’ the Transcription Discs for future generations. At the current  count, out of about 250 episodes, 7 survive in the U.S and 1 in Canada.  That’s not enough, we need to find more.

Huge Thanks to Tony Austin, Cereal Collector Extraordinaire, for the premium Info and most of the Howie Wing Australian information.  Tony was just waiting for someone to ask him about Howie Wing.

Postscript:  The above article was written back in 2005.  A lot has happened since, more episodes found, scripts, more premiums and a lot more information.  My Howie Wing collection has grown and it is time to bring you up to date