Sydney producer engineer author Allan Black, started recording radio programs as a trainee in 1956 and sold his company and semi-retired in 2001. Here's his fascinating story.

All or part of any written material, including graphics and photographs, submitted by Allan Black and contained in any of these ‘Parts’ is strictly copyright. © Allan Black 2016 - 2021.

All other material appearing in these 'Parts' (such as externally sourced photographs, artwork, advertisements, reprints etc.) are copyright their respective copyright owners, and are reproduced here on this website, under the "Fair dealing for purposes of criticism or review" provisions of the Copyright Act, 1968. (Australia)

All rights reserved. Nothing may be stored in a retrieval device for later use. Sight impaired visitors, please visit the home page first.

﻿The second World War saw the rapid development of wireless communications and post war, sees the fast growing sales of new wireless sets and portable battery radios for the public. People can take their portables outdoors on picnics and to the beach and with the introduction of jukeboxes and popular radio Hit Parades, this leads to more popular music being recorded locally. Home enthusiast studios appear and the Bee Gees record their early hit ‘Spicks and Specks’ in a small studio at Hurstville in Sydney. But because early professional recording equipment is big and expensive, to start with there’s only two big studios in Sydney, the English based EMI His Masters Voice and the Australian Festival Records. Eventually both studios can accommodate everything up to large orchestras and as the industry develops, they are constantly booked with recording dates, for music sessions, radio serials, advertising commercials, documentary and occasionally, film soundtrack scores. 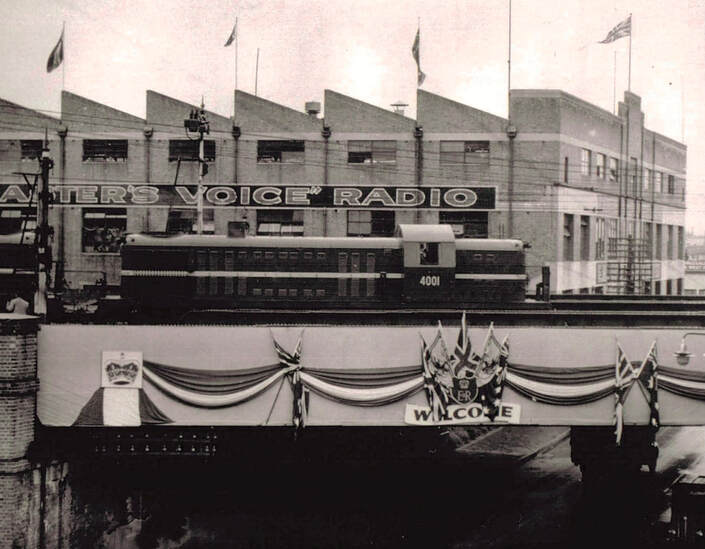 Both companies employ Artists & Repertoire staff to find local artists, place them under contract, then record and produce their 78rpm records in their own pressing factories. EMI follow their English masters with a big factory at Homebush Sydney, (note the Union Jack flag flying for the Queens visit in 1954) where they first record radio serials and music in Australia’s first professional recording studio. In late 1954 they move to bigger and more modern studios at 301 Castlereagh St. city, where they’ll be much closer to their advertising agency clients in the CBD.

Festival Records located at Pyrmont, also enlarge their studios as business booms. The popularity of ‘Rock and Roll’ encourages local artists, Johnny O’Keefe, Col Joye and the Joye Boys and many others to record their own songs and Col and his brothers open their ATA, Australian Talent Associates studio at Glebe in Sydney. Their talented engineer Bruce Brown, designs and builds their first big studio recording console, along with a series of multitrack tape recorders.

The Australian Record Company A.R.C., commences operations. Located in Adyar House on the 3rd. floor at 29 Bligh St., here they have 2 studios, A: the smaller one for commercial voice work and B: the large one for radio serials and music recording. In 1958-59 age 18, I worked in B studio enjoying doing live sound effects for Ron Beck’s radio serials. This taught me to pay constant attention and work ahead in the scripts to get ready for each cue. I haven’t forgotten the excitement and satisfaction and with my folks being impressed, that I’m on a first name basis with the professional actors they hear in their favourite radio serials each night. 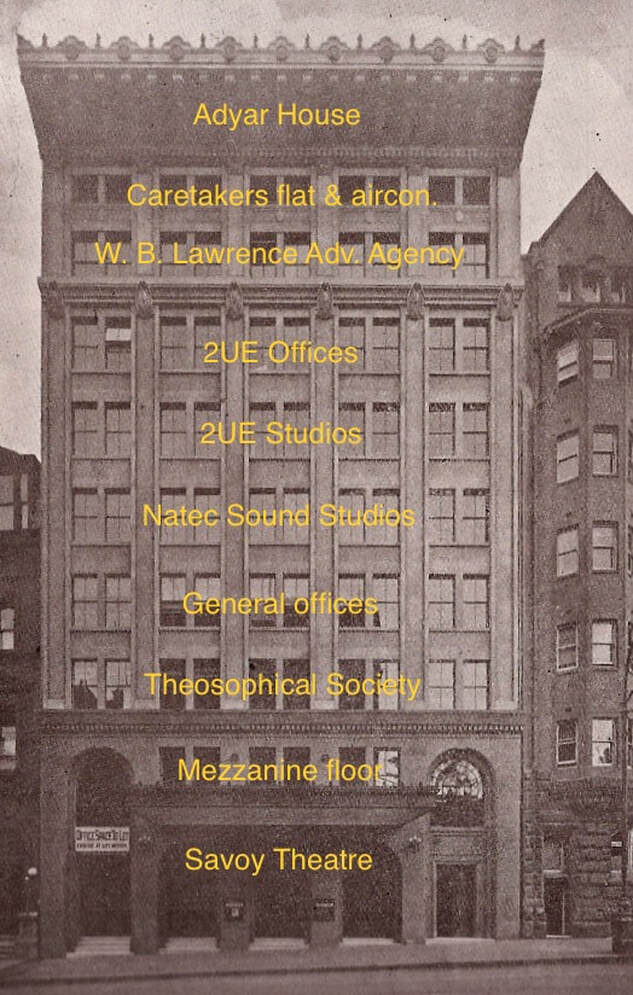 In 1960, Natec Sound Studios takes over from ARC Studios. Adyar House the 7 story office block, was built in 1925 for 100,000 Pounds. Never intended to be radio and recording studios, it’s fortunate that the builders, the Theosophical Society, commission prominent civil engineer and architect William Wardell, who reinforces the building statutes of the time. As a result, the solid construction easily withstands the vibration from the noisy trams and the constant city traffic, passing by in busy Bligh St.

Progressive Natec director Ron Purvis looks to the future, installing 16 and 35mm film projectors and film sound dubbing gear for TV commercials, film documentaries and feature movies. Ron also designs the big studio B recording console and a 4 track 1/2 inch tape recorder. Natec directors Stan Kanaar and son Keith using a lathe and tools on the premises, build the console and the recorder and design and actually build the big 5 rack synchronised film audio dubbers and its recorder, located in the recording room on the 3rd floor. Impressing everyone who sees this, it becomes so successful they take orders from other Australian companies.

Even though Natec studios are only one floor below 2UE studios, to me the differences between the 24 hour a day radio station and this 9-5pm recording studio are chalk and cheese. On the 4th floor, everything’s ‘on’ around the clock, the lights, the equipment, the staff on duty in the comfortable air-conditioning. At Natec each morning, the first person to arrive, enters a dark, silent reception area to turn on all the lights, the equipment and the air-conditioning plant for the day’s recording sessions.

So on my first day, after meeting the office staff, Natec recording engineer Maurie Wilmore shows me around the studios to get started.

I didn’t know how Natec Sound Studios got established on the 3rd floor at 29 Bligh St.

So Keith, son of the late Natec director Stan Kanaar recently told me the story. In 1958, it was Ted Blyde at Featured Theatre Ads. in Sydney, where Ron Purvis and Keith were working who came up with the idea, after ARC panel operator Jack Keniry, told Ron of the 3rd floor studios availability, when it was announced that ARC was selling to CBS Records. So Ron, Keith and Stan made an approach, took out a long 3rd floor lease, bought some of ARCs gear when they moved out, and started Natec. They hire 2 competent ladies as office staff.

﻿﻿﻿﻿﻿﻿In the years 1950-1970, major International advertising agencies established their Australian headquarters in ﻿the CBD in Sydney. Many of these big agencies are now clients of Natec, some within easy walking distance of our Bligh St. studios. Ron, Keith and Stan had regular recording work from these agencies foremost in mind, when they take over the 3rd floor studios.

On my first day in 1965, one of the first questions ﻿I ask Maurie Wilmore is, where did the name ‘Natec’ originate from. It seems Ron, Keith and Stan were working out a suitable business name for their enterprise. So National Acoustical Technical Engineering Company, became NATEC, a catchy name due to become famous in Australian recording studio history.

My job includes getting to know the advertising agency producers who book in to record voice tracks for their radio and television commercials. My workday at Natec will involve recording their voice sessions in Studio A, mixing in sound effects and music and meeting the actors and announcers, talented artists who live and work in this world everyday. 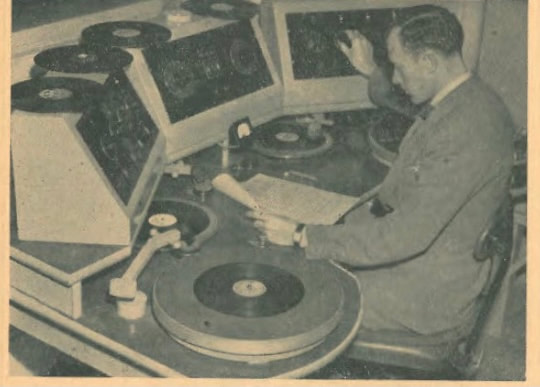 This is Studio A booth when ARC owned it, note the 4 turntables. All of this gear went to Nth. Sydney when Natec took over. So I get right into studying Natec’s new mono recording equipment in A and watch Maurie Wilmore record a couple of sessions. The first is 30 second radio commercials for a new Colgate toothpaste which includes a new adv. jingle orchestrated by Bob ‘Beetles’ Young and recorded by Ron Purvis in Studio B. I’m introduced to the ‘voice’ for the job, announcer Kevin Golsby and Jack Keniry, who now works as an agency producer for George Patterson Advertising. Jack and his assistant Bob Thomas walked the 20 minutes to our studios from their George St. Sydney offices nearby. 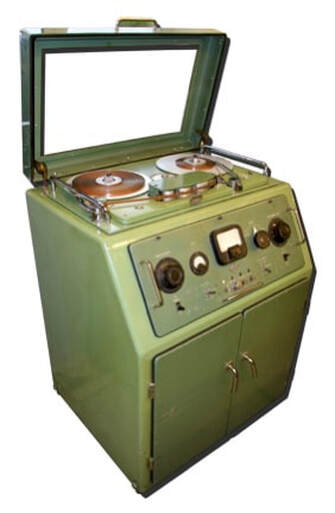 Maurie records the session on a big green EMI BTR2 mono tape recorder at 15ips (38 cmps) tape speed. The BTR2 is the same model used by the Beatles at Abbey Road, 2UE and EMI Sydney studios. Following the successful Colgate session Maurie records a tape copy of the final takes for Jack to take back to the agency for client approval. Then the agency will order the required number of disc pressings, this time in the hundreds, for broadcast by radio stations around the country. After the session Maurie fills out the job card, detailing the time and materials used, so the session can be invoiced by Natec for payment by the agency. Watching Maurie editing magnetic tape takes me back to working at Ron Becks, and the next thing I do is check out Natec’s large Studio B.

Amazingly, this is the B studio where I did work for Ron R. Beck when ARC owned it, so I go in and stand in the exact same position I did, when doing live studio sound effects for Larry Kent and Police File radio dramas. But the studio has now changed, Ron Purvis with Stan and Keith Kanaar have since redesigned and rebuilt it for recording music, and initially they spent 3 days covering the whole studio ceiling with empty egg cartons, hundreds of them. Keith tells me they bought them in metre square lots, direct from the manufacturer, and their shape copes with the studio acoustics. Up to this time I don’t know much detail about Ron and Stan and their work, and this is another introduction to their amazing talent.