Sydney producer engineer author Allan Black, started recording radio programs as a trainee in 1956 and sold his company and semi-retired in 2001. Here's his fascinating story.

All or part of any written material, including graphics and photographs, submitted by Allan Black and contained in any of these ‘Parts’ is strictly copyright. © Allan Black 2016 - 2020.
All other material appearing in these 'Parts' (such as externally sourced photographs, artwork, advertisements, reprints etc.) are copyright their respective copyright owners, and are reproduced here on this website, under the "Fair dealing for purposes of criticism or review" provisions of the Copyright Act, 1968. (Australia)
All rights reserved. Nothing may be stored in a retrieval device for later use. Sight impaired visitors, please visit the home page first.

﻿I arrive home in late Jan. 1963 to tell my parents and sister Betty what happened at NBN, that the production dept. has closed and I’m back home. I didn’t want to tell them by phone from Newcastle, just that I was coming home to Bondi for a visit. So they’re as shocked as I am and ask the same questions I did at the Delany Hotel. Why? What happened? I answer them as best I can, and their dismay is apparent. But when I tell them I still have a job, my dad is quick to say, “Well you were doing something right, and now they’re looking after you.” Your parents you know, they always support you.

They both know my mate Reg. Davis who lives in Newcastle, he worked at sister station 2KO there, joined NBN in 1962 with me on audio, and has now been retained. In fact from 1963 he moved to successfully directing live programs and retired in 1990. Not bad for a local boy, 28 years is some sort of record in television land, and Reg. told me later, the mood at NBN was subdued and quiet after we all departed from the studios.
So the following day, Monday morning at 9am, with my NBN reference I turn up on the 4th floor at 29 Bligh St. in the city, and ask to see the manager of the panel operators, Jack Pettit. On the way to his office I meet a couple of the staff who I haven’t seen for 12 months and they ask, “What are you doing here?” So they don’t know what happened, but Mr. Pettit does, he listens to my story and commiserates with me. He says some of the UE staff got together at a suitable TV reception house for a party, to watch the NBN official opening program last March 4, and they all clapped when they saw my credit come on the screen. I’m feeling a bit better. 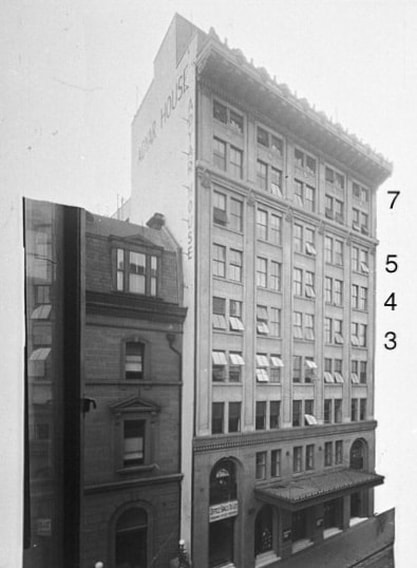 Adyar House now sometimes mistakenly called Savoy House after the picture theatre, was built by the Theosophical Society as a plain office building in 1925. However as we’re seeing here, it has a prominent place in Australian entertainment history.

But right now I get a sinking feeling, because after rising to the position of being the first permanent breakfast panel operator in 2UEs history, when Mr. Pettit updates and gives me this week’s panel operators schedule, I’m down at the bottom of the pack. Starting tomorrow, I’m listed to do 4 days studio productions 9-5pm., then the grave shift 2-10pm next Sunday night with announcer Doug Harris. Ah well, at least I have a job.

Even though I’ve only been in the city of Newcastle for a year, returning to busy Sydney in Jan. 1963 highlights the differences between the two cities, especially the traffic. To get to 2UE from Bondi, I take the tram instead of driving my Austin Healy in because the daily parking is costly. So my sports car sits outside with the hood up, 5 days a week.
Back at 2UE, I haven’t forgotten any of their operational routines, there’s a few new staff and technical upgrades which are easily coped with, and it broadcasts 24/7 so the studio lights are on constantly. Whereas at NBN with the transmission hours 2-10pm daily, 11pm on Saturday night, the station is then dark till the offices open next morning and the excitement starts all over again. I really notice the differences, it does make for a different lifestyle.

In Sydney Beatlemania has now taken over the airwaves, one columnist writes, ‘if you dial twist across all the commercial stations, chances are you’ll hear Beatles records playing on all of them.’ 2UE has an active social club, before I went to Newcastle I was a member and even though we were a close community at NBN, I missed it. At UE in 1961, DJ Bob Rogers had organised tickets for a Tom Jones concert at the Chevron Hotel, then later the modern jazz pianist Thelonious Monk and his quartet at the Trocadero in George St. We all went along, both were great events.
But in 1962 when his 2UE contract was up, Bob received an offer from Sydney’s 2SM which he accepted, taking up his DJ duties there within a week. His UE spot was taken over by Scott Newman aka Paul Ricketts, a DJ announcer originally from New Zealand. He has a different style from Bob, and works hard at retaining the UE drive time audience. A friend of Paul’s is Ron Purvis who comes in and visits with Paul. Mr. Purvis is a director of NATEC Sound Studios on the 3rd floor, one floor down from 2UE in Adyar House at 29 Bligh St. I didn’t realise then, how much he would influence my future career.

Satchmo flashes his world famous smile as he says, “This is to keep your pipes clean.” We all laugh enjoying our hosts apparent humour, but I can see he’s serious as Lucille passes around drinks and eats. Then following his exhausting concert, Louis recounts some great stories entertaining everybody. He’s a wonderful story teller but I take my packet of Swiss Kriss home too scared to take it, and keep it for years. Much later when I tell my wife where I got it from, she just smiles at me.

However, years later on a TV show about Armstrong‘s life he says, “Then I bought into a new American herbal laxative company” ... Swiss Kriss!

I still haven’t taken mine, it’s past its use by date, thankfully I didn’t need it.